Currently sitting in the LAMA lobby is a clean example of one of  Shiro Kuramata’s best known works, the PC/3 “Side 1”.  From the Progetti Compiuti series, the PC/3 “Side 1” was first designed in 1970.  Kuramata is most known for incorporating industrial materials into traditional Japanese designs, which allowed him to infuse his own Surrealist aesthetic into everyday objects. In the case of this chest of drawers, Kuramata takes a traditional design and gives it more life through undulating curves and a movable base. The PC/3 “Side 1” is composed of black-stained ash. Drawers have a matt white lacquer and brushed steel knobs. This particular example will be for sale in the upcoming October 2010 LAMA Auction at an estimate of $14,000 – 18,000.

Today we just got in a group of eight walnut “Good Design” chairs for Glenn of California and a “Cobra” Lamp both by Greta Magnusson Grossman. The enigmatic Greta Magnusson Grossman earned her prestige and influence in mid-century modernism through her innovative designs that fused Swedish minimalism with California cool.  Though Grossman isn’t as recognized as some of her male contemporaries, such as Richard Neutra or Rudolph Schindler, Grossman’s work was often showcased in Arts & Architecture through the photographic lens of Julius Shulman who shot a number of her interiors and lamps.

Grossman produced a series of table lamps for the Ralph O. Smith Company.  One of these iconic lamps was informally dubbed the “Cobra” lamp because its oval shade echoes that of a cobra’s hood.  The lamp came in ten colors with a flexible gooseneck and the option to mount it on a wall. Its eye-appeal, function, construction and price earned it the “Good Design” award in 1950, a yearly competition that showcased “the best new design available on the American home furnishings market.”[1] Later that year, it was exhibited at Good Design show at MoMA.

Greta Grossman 'Cobra' Lamp, designed circa 1950, To be offered in October 2010 LAMA Auction

The chairs she designed for the Arcadia, California furniture company Glenn of California won her a second “Good Design” award in 1952.  The “Good Design” chair is composed of California walnut wood, steel, formica and colorful textiles.  The combination of man-made and natural materials embodied the essence of Southern California Design movement seen in the works of her contemporaries Milo Baughman, Kipp Stewart, and Charles and Ray Eames.  However, her distinctive petite proportions set her work apart. 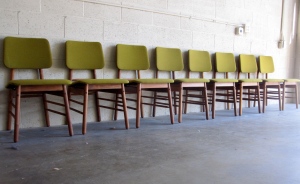 Group of Eight "Good Design" Chairs designed by Greta Grossman for Glenn of California, circa 1952, To be offered in October 2010 LAMA Auction

This group of eight “Good Design” chairs and “Cobra” lamp will be for sale in the October 2010 LAMA Auction.