Much has been made about whether beginning collectors should buy originals or should start by acquiring prints and multiples. This is a line of thinking that has been around the art world for generations. However, with the case of modern graphics or prints by modern artists, there is increasingly little difference between originals and prints. Take the case of Ed Ruscha.

Traditionally many artists created prints so that there would be a more affordable option for a collector to acquire a certain image. In other words, artists may have sold an important oil painting and they would then simply authorize a number of copy to be made through lithography so that the image would be more accessible to a greater number of people.

Ruscha, however, was much more interested in the process of printmaking than simply making copies of his paintings. He knew from the beginning of his career that the printmaking process lent itself to a completely different set of rules than creating works on canvas.  Like Picasso before him, he consistently pushed the envelope and was interested in what might be possible through experimentation. 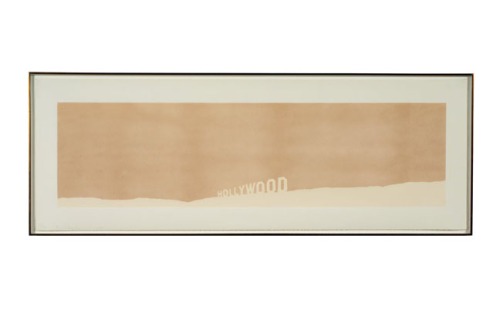 Specifically Lot 210, Fruit-Metrecal Hollywood, was created not with traditional printer’s ink, but rather with actual fruit juice from a brand called Metrecal.  In addition to experimenting with the process, there is also a sly statement being made about Hollywood as it relates to the growing fitness craze. Similarly, he would also create two more editions of the Hollywood subject matter using caviar and Pepto-Bismol as the printing ink. This week a previewer who was familiar with the process told an interesting story about the Pepto-Bismol edition:

Ruscha had sent an assistant around the corner to a grocery store to by a bottle of Pepto-Bismol as an experiment to see how the liquid would react when pressed through the silkscreen onto the paper. After the first proof they decided to make an entire edition and the assistant was sent back to the market to buy a whole case of the product. The cashier then remarked “Well, I guess this stuff really works!”

The curiosity and experimental nature of Ruscha’s work during this period proves that the medium of printmaking can result in works that were not possible using oil on canvas. Anytime an artist is using the printmaking medium to create original works, rather than to make simple copies of their paintings, the market will always respond favorably.

What is Svpply, you may ask? “Svpply is a new kind of store, built specifically for you.” This site allows you to follow your favorite stores and people who expose you to new products. You can also track specific products from any retail site.

For more Ed Ruscha lots to be offered in the March 6, 2011 Modern Art & Design auction check out the Ed Ruscha Featured Artist page.

Posted in LAMA Exclusive, LAMA in the Press

Last night we attended Tom Marioni’s on-going installation at the Hammer Museum, Drinking Beer with Friends is the Highest Form of Art (1970).  Rather than focusing on Object as art, Marioni probes Action (and its evidence) as art by bringing together specific music, furniture, lighting, people and general ambiance to create an environment he feels is appropriate for an art experience.  This was not just another art reception, we were actually the art participating in a planned space acting as we pleased.

As we walked into the installation we were greeted by two wall drawings, a bar, shelves of beer, and of course Ed Ruscha (who was tending bar). We approached the bar and Ed Ruscha asked us what we would like to drink. I guess that was a silly question and hilarious in the fact that he opened a refrigerator full of only Pacifico beer. The bar-back happened to mention that Ruscha use to only drink Anchor Steam, but made a switch to Pacifico because it’s lighter in taste and he loves the label.

At first I will say, we felt a little awkward. We were at the Hammer Museum, so we naturally were expecting to look at something and read about it, but there were only two wall drawings and a TV with a static depiction of a gurgling beer, and of course Ed Ruscha hamming it up at the bar.  Talking with our friends and strangers quickly felt ironic. Cameras and video cameras were documenting our every move. But the ice broke quickly when Tom Marioni stood upon a soapbox and played a pre-recorded trumpet announcement into the microphone. Laughter. A series of  jokes and quotes then followed:

“Why is abbreviation such a long word?”

After ten minutes of jokes (he did ask us to tell him when his ten minutes were up), everyone seemed to have forgotten where we were and began to really let loose. I finally sat down, talked to new people and forgot about the cameras. As I talked to friends while Frank Sinatra played in the background with a Pacifico in my hand, I could not help but to be at ease.

As you know from an earlier post, Peter kept the design of his booth very secretive, and I am glad he did because when we showed up to the event, the booth blew us away! The offerings Peter compiled for this show are outstanding: Otto Natzler ceramics (from Otto’s personal collection, which have never been offered on the market), the largest collection of custom-designed John Nyquist furniture known on the market, AND an original Ed Ruscha pastel titled “Preparations”, 1974.

The turnout was equally as impressive and everyone seemed to be having a great time. If you have time today or this weekend, you should definitely stop by the show and see the LA Modern booth. Here are some photos: